Episode 150 (The Hidden Tavern) begins with Jericho’s group arriving at a tavern inside a mountain called My Sweet Gluttony.  The tavern owner seems to be acting very strangely after seeing Ban.  Melascula and Galland also arrive at the tavern and intimidate the tavern owner, who cowers behind the bar.  The tavern owner gives the two [Ten Commandments] some delicious ale, which distracts them while Jericho, Elaine, and Ban hide unseen.  Galland points out that he is fully aware that the three of them are hiding out in the tavern, and since they are close to the brink of death he knows that they will not have long to survive.  Thus, he begins with wanting to play what he calls The Galland Game.

This episode has three main stages:

Each stage costs 12 Stamina and grants one Diamond upon completion as a reward.

Preparing for this level has a bit of a spoiler because Escanor is a required hero.  Once you enter to start, you will be taken into a cinematic of Galland speaking with the tavern owner (who is revealed in the dialogue log to be Escanor, although he is in wimpy form).  Galland shares that he wants to play a game and that if Escanor wins the game then Galland will let him and the three individuals hiding live.  As he is Galland of Truth, a promise is a promise, and the rules of the game are simple -- it’s a one-on-one fight to the death.  After determining who goes first, Galland and Escanor are to deliver one strike apiece.  Whoever dies first loses!  Escanor reacts with shock. 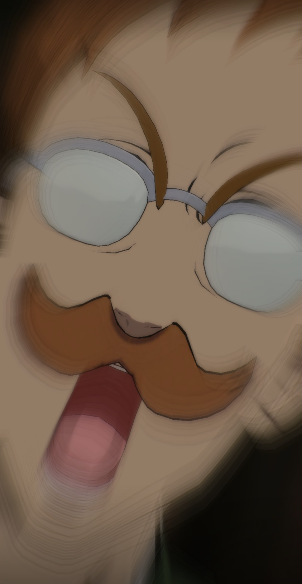 Galland “graciously” offers to let Escanor go first, and pressures him into deciding whether or not he will play the game.  He also conveys that once Escanor swears to play the game, he is forbidden to back out or run away.  If he breaks that vow, he will be turned into stone by the curse of the Commandment of Truth.  Naturally, the same curse applies to Galland himself.

While Galland is speaking, Melascula draws his attention to the fact that Escanor isn’t listening -- he’s passed out on the floor due to Galland’s “gentle tap on the shoulder”.  Bored, Melascula, and Galland wait for half a day for Escanor to hopefully wake up.  As they wait, they realize that the weather is getting hotter and hotter. 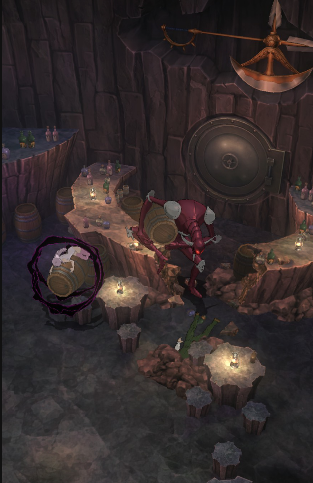 Galland suddenly notices a beautiful battleaxe hanging up on the wall.  He reaches for it and finds that it is very heavy. 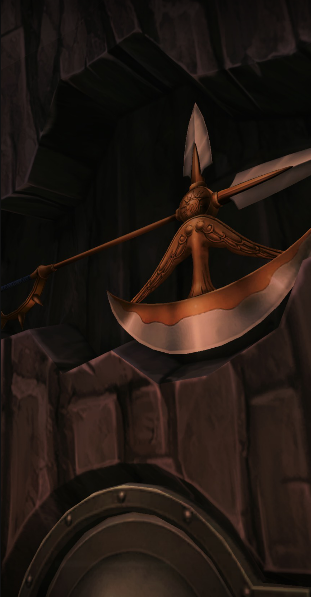 He concludes that the design is flawed, because the hilt is too short for a two-handed axe, and a disembodied voice announces that it is actually a one-handed axe.  The camera pans to reveal a burly man, who shares that Sacred Axe Rhitta is the name of the axe, and that it bears the name of the maiden who was adored by the sun.  A mere Demon who writhes around in the shadows is not worthy of touching it.

The burly man continues to grow, and his shirt tears under the burden of his growing chest.  He voices that Melascula and Galland are very unlucky, as they wandered into a remote tavern only to die.  Melascula scoffs and points out how ridiculously arrogant this man is.  Slowly but surely, Galland realizes that this man is the barkeep, and he is completely different from the man who was originally challenged for the Galland Game.  Escanor announces that, while he is a human, he is also the one who stands at the pinnacle of all races as the [Seven Deadly Sins] Lion Sin of Pride. 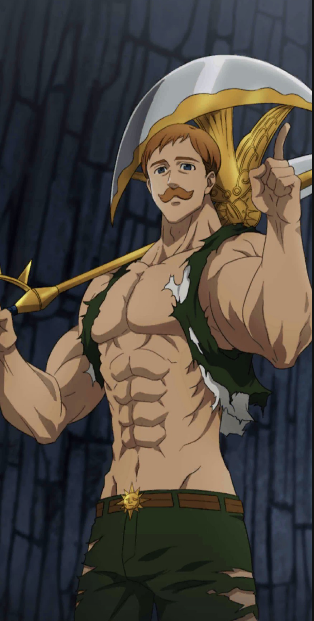 He has the following passive skills:

He has the following active skills:

This series of bosses is very similar to the bosses previously fought in Episode 115|400px|center.  Ban, Elaine, and Jericho are restricted heroes (since they are cowering in the bar’s vault), so, unfortunately, they are not available candidates for use in this battle.  You cannot use Rank Up or Rank Down skills, so don’t bother bringing Red Gowther or he will be petrified on every turn.

As mentioned earlier, Escanor is a required hero, and he does a hefty amount of damage on his own.  Using his first skill cards at Rank 2 or higher will help to rush his Ultimate Move gauge.  If you want to wrap up this battle faster, you can also bring along another DPS character, such as Red Derieri or Green Meliodas.  Additionally, heroes like Red Helbram or Green Gowther are useful for depleting the Ultimate Move Gauge of Galland to minimize his impact.

For a sub-slot hero, Green Merlin’s Unique ability gives the team a head start by filling the Ultimate Move Gauge of all allies by one orb at the start of the battle.   Alternatively, Green Jillian is good to use in conjunction with Green Meliodas, since she’ll increase his (and any other HP heroes’) HP by 30%.

The second stage begins with Galland reminding Escanor that Demons rank above all others.  Escanor, very conceitedly, remarks that he is aware of that and the game wouldn’t be very exciting otherwise.  Annoyed, Melascula remarks that Escanor is an arrogant, idiotic Human who doesn’t know his place.  Galland exclaims that Escanor is going to regret not having killed him with the first blow, and unleashes his magical power, “Critical Over”.  <<image>>

He was intentionally planning to reserve the move for his rematch with Meliodas, but he realized that every instinct in his body was telling him that he needs to eliminate Escanor immediately.  Melascula shares that “Critical Over” increase Galland’s strength to its limit, which is a simple yet effective ability.  In this state, he has 40000 Combat Class.

He has the following passive skills:

He has the following active skills:

Galland gets to have the first attack on this battle, so you need to make sure you have a lot of HP to survive his initial attack.  In addition to the team listed for the prior boss, bringing a healer along, such as Green Elizabeth, can also help to protect your Escanor so that he can survive to rush his Ultimate and beat Galland.

Meanwhile, somewhere in the distance, Merlin and Meliodas are seen talking.  Merlin shares that she can sense Escanor and that his current Combat Class keeps rising as time passes.

At the end of this battle, Escanor deals a shocking amount of damage to Galland, causing Galland to attempt to run away.  However, as per his Commandment, this causes him to turn to stone. 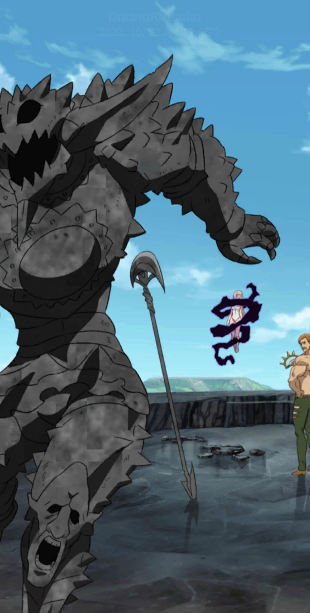 As everyone looks on at the stone Galland, Escanor turns to Melascula and offers her a special favor to choose escape or death.  Melascula mockingly thanks Escanor for getting rid of “that loud-mouthed geezer”, and offers as a token of thanks to kill Escanor right then and now.

She has the following passive skills:

She has the following active skills:

Similar to the last battle with Galland, Melascula will get to make the first attack so you want to bring in Heroes with a lot of HP.  Her Commandment will create debuffs every turn on any Heroes that you do not use during that turn, so take care to utilize each Hero each turn whenever possible.  After her first attack, she will be set up to use her Ultimate Move immediately on her second turn.  Since she has an AOE attack, Green Meliodas’s Counter skill will have a high chance of being triggered if used.

After the battle, Melascula casts “Gloom Cocoon” and attempts to steal Escanor’s soul. 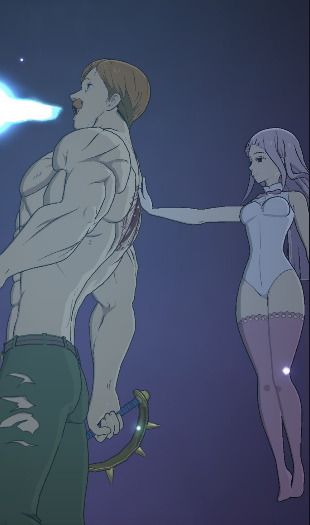 As she consumes it, she begins to feel fire burning from inside her stomach up through her throat and face.  She shrieks as she asks what this intense power is as she is being burned.

“Sunshine”, Escanor answers, which is his magical power.  Jericho looks on in awe that the fact that Escanor took on both Galland and Melascula by himself.  Escanor turns to Ban and states that he has questions to ask, but that the time is almost noon.  He asks that Ban stay put until nightfall, and Ban responds that they are all too tired to move anyway.  After Escanor leaves, Ban continues to hold Elaine in his arms. 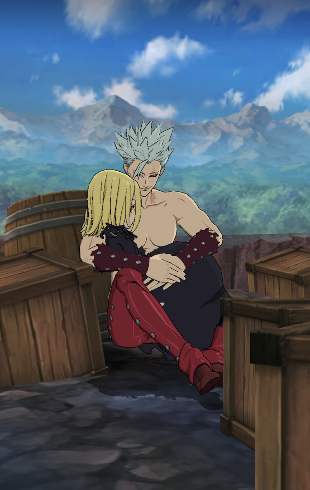 Ban and Elaine tearfully hold each other as they discuss how happy they are.  Elaine says that she would not be scared, even if she were to die again, and Ban tells her not to be ridiculous.  Jericho, in a surprising show of support, argues that Ban and Elaine will figure it out together, and reminds them that Melascula had stated she had revived the dead by amplifying their regrets, and since Elaine’s anger towards Jericho was gone, she was still “oozing” with affection for Ban.  Tearfully, Elaine thanks Jericho, and Jericho grins back in response.

The episode concludes with the ladies being introduced to the skinny version of Escanor once again.  Ban shares that “he’s a giant man when the sun’s up, but [...] after sundown he’s funny and weak.”  Escanor agrees to return to [The Seven Deadly Sins], but first must keep a promise to make an alcohol delivery.  As the group prepares to depart, King flies in on Oslo and is shocked to see Elaine.

Completing this episode will unlock the Secret Uncovered|400px|center event.