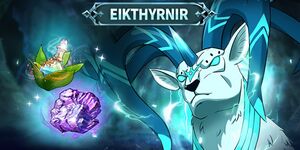 This guide covers the recommended team compositions and strategies to beat Eikthyrnir. The goal is to maximize the acquisition of River Source, a rare material exclusively acquired from the First Time Stage Clear rewards and World Tree Tower Exchange Shop.

Demonic Beast Battles are the main source of Holy Relic materials. When crafted, it grants special effects and additional basic stats to registered heroes. It is the most difficult PVE content to clear, requiring your heroes to be maxed out in levels and equipment to compete. Specific skills are also needed to counter the gimmicks on each Phase. Damage Reduction and Strong single-target burst damage are important characteristics to have on your team.

There are currently three floors, each with 4 phases to clear. First Time Stage Clear Rewards can be claimed after clearing a floor once before reset. Simultaneously, stage rewards can be farmed repeatedly to acquire other materials.

Damage Dealer - Heroes with high single-target damage that can cut through the boss’ high defense.

Support/Utility - Heroes who can greatly reduce damage from the boss, while being able to power up and boost the team. Surviving for a few turns will help you collect all the necessary cards before moving on to the next phase.

Taunt - Redirects all single-target attacks to the hero with higher defense capability.

No.3 Adventures in Midgard

Since Eikthyrnir is a fierce demon with high attack and defense, Recovery/Taunt and Damage Reduction are necessary skill effects to bring in battle. Red Halloween Matrona can recover allies every turn while receiving damage, while Green New King Arthur can reduce incoming damage with his Unique ability.

These two phases should be used to prepare and collect the necessary cards needed for Phases 2 and 4.

What you need to prepare are Attack and Ultimate cards from the 3 Attributes (Strength, HP, and Speed)

The special effects of Green New King Arthur and Dark Traitor Meliodas greatly reduce the damage received from the boss. Thus, It will be easier for you to collect the damage cards needed over time. Red Halloween Matrona will be used to taunt all attacks and recover allies based on the hero’s diminished HP. On the other hand, Blue “The One” Escanor will be the main attacker for Speed-type heroes.

In Phase 2, it is best to defeat the boss with skill attacks.

In Phase 4, it is recommended to use the special moves of each attribute in order.

Attack order is important on Phases 2 and 4; the sequence of attack must be in Strength → HP → Speed

Attacking continuously with the same attribute will penalize your team and will disable your attacks.

Note: Dark Traitor Meliodas will ignore the attribute specification requirement. The pattern also does not change when attacking at the beginning of the turn.

You can track which attribute is needed by looking at the color indicator above the boss. You can follow the attack sequence by looking at the “attribute display” on the upper right of your screen. By keeping the order of attacks, attack-increasing buffs are applied to allies which makes it easier to defeat the boss.