Performing boss battles can sometimes trigger a Death Match, which are high reward but high difficulty battles.  The probability of triggering a Death Match is increased by each subsequent boss battle.  Once triggered, there is a time limit of one hour to enter and defeat the Death Match boss.

To help you make the best use of your time in Death Match, we’ll cover the following topics below: 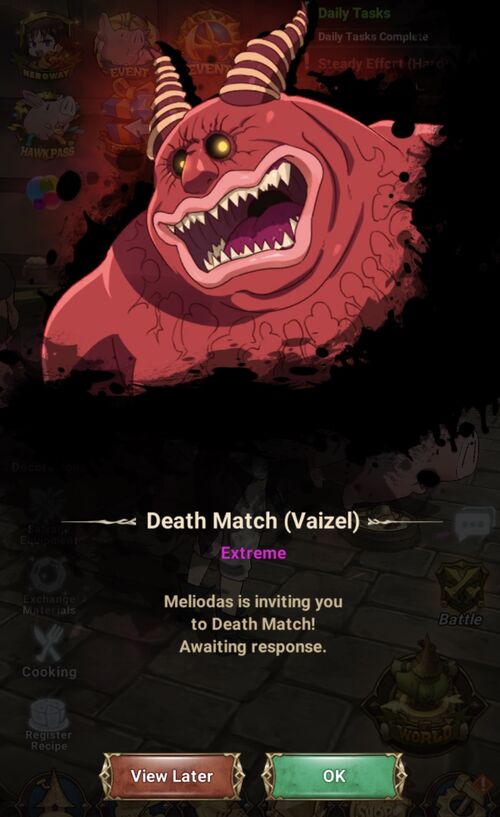 If you have the time to spare, accept these as quick as they pop up!  Otherwise, someone else might accept and you’ll miss your opportunity. 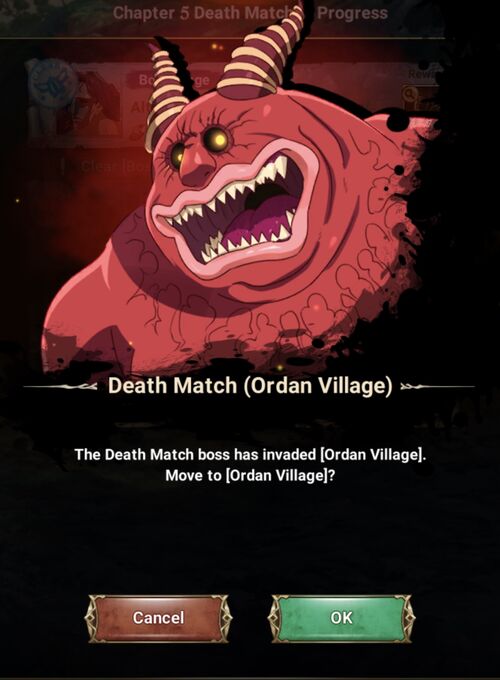 Before starting your Death Match, you’ll want to prepare yourself from this screen. 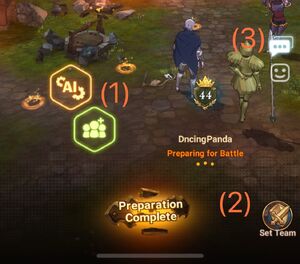 Once you’re done with setting up the above three items, click “Preparation Complete” and then “Start Death Match” and you’re ready to go!

When you’re in the Death Match, you can only use Stamps to communicate.  Here’s an example from a recent Death Match: 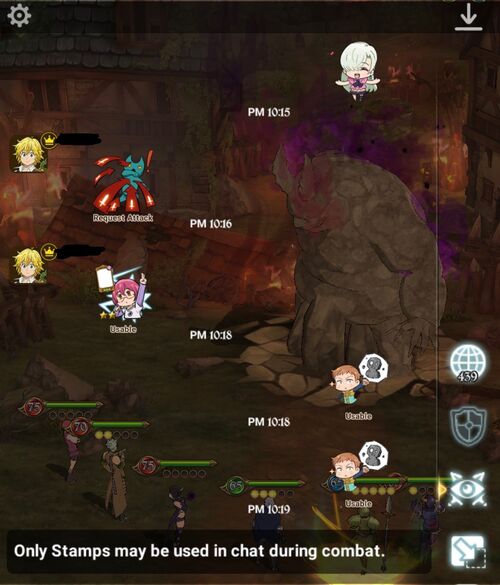 In the above image, the Stamps used from top to bottom indicate the following:

As you can see, using these Stamps is a great way to tell your friend what skills you have available so you don’t waste any moves.  If you’re trying to freeze or petrify the boss, you want to make sure that your friend knows you have that available so that you get the last move from the turn.  Otherwise, if he/she attacks after you, it releases the boss from being held back.  Also, chibi Elizabeth and Diane are super cute so I like throwing in a cute “Yay!” and “Thank you!” from time to time!

If you select AI, your AI-friend will always make their first three moves immediately.  If you are playing with a real person, you’ll each get three turns.  There are three bosses currently available to fight in Death Match, which are the Red Demon, Gray Demon, and Howlex.

The general strategy is to always make sure the turn ends with a freeze or a petrify skill, to keep the enemy from attacking as shown in these two examples of Merlin’s Frozen Factor skill and King’s Spirit Spear Chastiefol, Third Form, “Fossilization” skill, both of which have prevented the boss from attacking me and my friend during his turn.

The Gray Demon boss is unlocked after completing Chapter 6 of the main story. At the start of the battle, the Gray Demon will be invulnerable to melee attacks for 3 turns while it is flying. Unlike the Red Demon, the Gray Demon cleanses all debuffs at the start of its turn which renders Merlin/Gustav's freeze and King/Helbram's petrify skills ineffective for use.  To kill the Gray Demon, the most effective strategy is to use a Green King since he gains bonus damage against the Gray Demon due to his race and his attribute advantage.  An alternative damage dealer would be Green Meliodas and Green Jericho, however, make sure your supports can hold out until the demon stops flying and can be damaged.

Howlex is unlocked after completing Chapter 7 of the main story.  To beat Howlex, you should bring one strong attacker and two supports that can help sustain oncoming attacks and boost your attacks. Like the Gray Demon, Howlex is also immune to CC, which makes freeze/petrify/stun moves useless. Notable damage dealers are Red Demon Meliodas, Blue Nunchuck Ban, Green Jericho, and Red Elizabeth & Hawk. Red Gowther is always the primary choice to fill up your first support slot since his Invasion Arrow skill provides so much offensive and defensive utility.  Lastly, utilizing Red Arthur, Green Gilthunder, or Green Helbram is a smart choice to complete your Howlex team.

After you’ve killed the final heart, it’s time to celebrate your win!  You will get two types of rewards for victory: