A number of top tier SSR and SR heroes are surprisingly available for free by purchasing them in the Coin Shop.  This is one of the many ways in which F2P players can continue to progress in the game without spending money.  For more ways on how to earn in-game currency, review the F2P guide under the Tips category.

Whenever you summon a duplicate of a hero that you’ve already unlocked before you will receive a coin.  You can then spend coins of Heroes that you don’t want in order to buy even better Heroes’ coins in the Coin Shop.

The most cost-effective way to spend Coins is to wait for specific Heroes to show up in the Limited-Time Sale section. 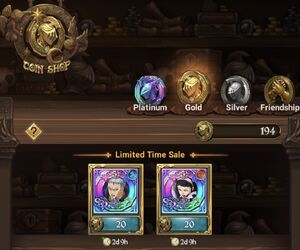 This section changes weekly and will apply to Heroes that are available in the Coin Shop.  Keep an eye on discussions in the Discord channel to see alerts of who will be available for each week’s sale.

Unfortunately, there is not a way to see which Heroes you have already maxed out their Ultimate Moves on to know which Coins are safe to spend without impacting any of your other Heroes, so it’s a good idea to already spend any Heroes whose Ultimate Moves you want to level up before you come to the Coin Shop.

The below sections describe who the best Heroes are to purchase from the Coin Shop.

For the most part, R Coins should only be spent to buy stamina pots.  SR heroes are acquired very easily, and buying them in the Coin Shop should only be done as a last resort.  Of the Heroes available in the R Coins

The Seven Deadly Sins are primarily found in the SSR Coin Shop.  If you’re limited on Platinum Coins (as most people are) in the early game, focus primarily on Red Gowther, Green Merlin, and Blue King. If you're later in the game and not sure of who to prioritize, you can't go wrong with Green Estarossa, Red Zeldris or Blue Drole.

As more Heroes become unlocked, they will eventually get added to the Coin Shop.