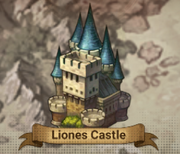 The Liones Castle and its Kingdom represents a large and powerful country that is protected by its knights and its order of Holy Knights. It was built over the vestiges of the Fairy King's Forest from Ancient Britannia.

Liones Castle was formerly ruled by the family of Liones before a coup d'etat at the hands of the Holy Knights, which made it a puppet state. After the defeat of Great Holy Knight Hendrickson, the royal family was reinstated.

After Meliodas left, King and Diane headed to the capital. King comes up with a way to reach the capital faster.

Diane reaches the capital of Liones using Oslo, but Dreyfus and the Holy Knights already stand in her path.

Just when things look hopeless, Guila and Howzer stand against Dreyfus and Helbram. Will they be able to defend Diane?

Gowther suddenly appears and calmly launches himself at Dreyfus.

[Episode 53] In Order to Protect

King stands against Helbram to prevent him from killing Diane. King is especially upset by Helbram’s actions, as they’d been good friends in the past.

Helbram speaks up about how he feels betrayed by King and vows to show him how it feels to lose someone he holds dear.

700 years ago, when King was known as Herlequin, Helbram was a Fairy who trusted and befriended Humans. But no longer...

Now that the dust has settled, Diane and King begin to worry about Meliodas, who is on a mission to rescue Elizabeth.

Meliodas and Hendrickson finally meet again after 10 years. The man brandishing his sword at Hendrickson introduces himself as Arthur Pendragon, King of Camelot.

[Episode 58] The Way of the Knight

Gilthunder joins the battle between Meliodas and Hendrickson. Gilthunder levels his sword at Meliodas and tells him that he hasn’t forgotten the Knight’s Code he heard on “that day”.

Meliodas is backed into a corner, facing against Hendrickson, Gilthunder, and Vivian’s cooperative attacks. Will he be able to defeat them?

A woman watches the fight unfold between Gilthunder and Meliodas. She is Margaret, the first princess of Liones.

Gilthunder has finally broken free of the curse! Gilthunder imbues his attacks against Hendrickson with his pent-up rage.

Unable to accept Gilthunder’s betrayal, Vivian becomes enraged. Who will be able to stop her frenzy?

Vivian reveals Elizabeth’s whereabouts to Meliodas and crew. Will they be able to rescue her?

Dreyfus appears in the king’s chambers. He weeps, confessing to the crime he committed 10 years ago.

[Episode 65] On the Verge of Collapse

King attends to Diane after dealing with the situation at hand. Suddenly, the city is shaken by tremors and an intense roar.

Jericho, who’d been writhing in pain, suddenly turns into a grotesque monster. What in the world is going on?

Jericho and Guila writhe on the ground, seemingly in pain. What is happening to them?

The New Generation Knights have turned into Mutants and gone berserk, wreaking havoc in the capital of Liones. Will Meliodas and crew be able to contain the chaos?

Everyone believed Hendrickson to be dead, but he has somehow revived! And he somehow seems different from before...

Ban appears before a thoroughly wounded Meliodas. Meliodas asks him for his help in rescuing Elizabeth, but Ban’s response is lukewarm.

[Episode 71] The Meaning of Friendship

Seeing the pain on Ban’s face, Meliodas tells Ban to kill him. Will Ban really be able to kill Meliodas?

Meliodas asks Hawk to take him to where Elizabeth is. Will Meliodas be able to rescue Elizabeth?

There’s no trace of Hendrickson anywhere in the kingdom. Where in the world is he?

[Episode 74] A Return to Normalcy

Life returns to normal after Hendrickson’s defeat. Peace at last.

There’s a meat pie in the shape of a pig. It looks just like Hawk, but what does it taste like?

Elizabeth is worried about Hawk, who has run off in his tiny form. Meliodas finally gathers everyone and comes up with a plan to capture Hawk.

Everyone’s working together to capture Hawk, but it’s proving to be difficult.

[Episode 78] End of the Operation

An entire day has passed, but Hawk still hasn’t been caught. Where could he be?

[Episode 79] Promises Must Be Kept

Meliodas tells Ban that he’ll keep the promise he made when they were fighting Hendrickson.

Meliodas goes to see The Trumpet of the Goddess. It appears the Goddess dwelling in the horn knows who Meliodas is.

[Episode 81] To Keep a Promise

Ban heads to the Mountain Peak to fulfill his promise. What awaits him there?

The battle between Ban and Meliodas begins at last. Who will emerge victorious? Numerous spectators watch on as this epic fight commences!

Diane leaves the tavern early in the morning. Where is she going?

Diane says she wants to help the people in the capital however she can. She’s willing to do anything in her power to help.

Diane challenges King to a game of tag. Who will win?

A New Generation Mutant suddenly appears! King and Diane decide to work together to defeat the creature.

Elizabeth comes to the tavern, saying she has good news. What could it be?

Merlin asks Meliodas to shadow Gilthunder in order to catch a mysterious individual who’s following him.

Little accidents keep happening to the two of the Trio of Troublemakers. Only Gilthunder escapes unscathed. There’s something strange going on here...

A little boy named Pelio asks Gowther to play with him, but only if he’s not a bad guy. What kind of game does Pelio want to play with Gowther?

[Episode 91] Time for an Intervention

Gilthunder’s stalker turned out to be Vivian. What was she trying to do to him?

Merlin successfully captures her apprentice, Vivian. How will Merlin punish her for her deeds?

Merlin decides to keep the promise she made to Meliodas. Will she be able to successfully pull off being the Boar Hat’s mascot?

Elizabeth runs to the tavern early in the morning, excitedly announcing that she has some good news.

[Episode 96] Should I Stay or Should I Go

One rowdy evening when everyone was enjoying their meals, Ban asks Meliodas if he can have a word with him.

It’s time for the medal bestowment ceremony for [The Seven Deadly Sins]. It seems not everyone in the crowd approves of them receiving this honor, however.

Meliodas announces that anyone who has a problem with him should say so to his face. [The Pleiades of the Azure Sky] step forward to voice their displeasure.

[Episode 99] The Pleiades of the Azure Sky Retreat

Having seen the full extent of Meliodas’ powers,  [The Pleiades of the Azure Sky] retreat without further protest.

On their way back from the medal bestowment ceremony, Meliodas and crew run into the Trio of Troublemakers.

The [Ten Commandments] have been revived! Meliodas makes preparations to go on a journey to stop them.

Meliodas tells Merlin about the return of the [Ten Commandments].

[Episode 103] To the West District

Meliodas tails Gowther to the West District. What’s going on?

Gowther confesses that he used Guila and Zeal to understand what Humans think and feel. Diane is furious with him.

Gowther finally goes berserk. Will Diane be able to stop him?

The West District is in shambles. What in the world happened there?

After the chaos Gowther caused, Merlin determines he’s too dangerous and removes the magic that had been cast on him. What is Gowther’s true identity?

Now that the truth about Gowther has come to light, Diane finally grasps why he was so obsessed with understanding Human emotions.

Meliodas and crew decide to return to the tavern and recount the day’s events.

Merlin senses something amiss in Camelot, the kingdom down south. What’s going on in Camelot?