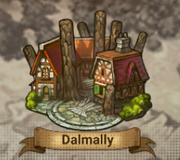 Dalmally is a small town located eight miles northeast of Baste Dungeon. It is the place where Diane, Elizabeth, and Hawk stopped by to treat Meliodas’ wound before entering the dungeon where Ban was held captive.

Diane has joined the team! It’s time to decide where to go next. Where will Meliodas choose to go?

[Episode 10] Anything for the Captain

Meliodas collapses after his battle with Gilthunder. The group decides to go to a nearby village to get Meliodas some medical attention.

A suspicious shadow approaches the village from afar. What in the world could it be?

Meliodas’ caretaker, Dr. Dana is looking urgently for Elizabeth. Could something have happened to Meliodas?

Meliodas is finally awake! But Golgius of the [Weird Fangs], who tried to kill him earlier, has already fled.

Golgius threatens Meliodas by popping up all around him. Does he truly have teleportation powers?! There’s something fishy about this, especially after what Hawk said. What is Meliodas’ plan?

Meliodas has successfully lured Golgius into a trap. He questions the cornered Golgius. Will Meliodas get the answer he’s looking for?

[Episode 16] Even if You Should Die

Meliodas and crew successfully defeated Golgius. However, instead of heading to Baste Prison, Elizabeth runs toward the dying Dr. Dana.

Elizabeth promises to fight to protect the kingdom and its people. The group heads to Baste Prison to rescue Dr. Dana’s daughter.

Everyone thought Dr. Dana died, but he miraculously survived. Dr. Dana reunites with his daughter Sennet, who was rescued from Baste Prison.

Shooting stars suddenly light up the sky, like in the old Britannian poem that reads “A great threat shall fall upon Britannia when the whole sky is lit by a blazing cross.”

After the insect attack, the town of Dalmally was in a bad state. Thanks to everyone’s efforts, however, the village slowly returned to its old self.