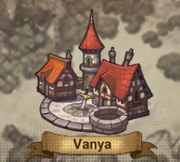 Vanya is a small village located within Britannia, seven miles southeast of Fort Solgres. The village is renowned for brewing the famous Vanya Ale made from the river water that flows through the village, hailed as having the best sweetness, richness, and fragrance of apples in Britannia; along with grout (brewing herbs) that grow abundantly along the banks.

Customers gathered at the Boar Hat trade stories about [The Seven Deadly Sins]. Suddenly, the Rust Knight enters the tavern.

Meliodas and Hawk rescue Elizabeth, who was being chased by the [Beard of the Mountain Cat] Knights. However, another figure stands in their way.

Meliodas and his crew arrive in Vanya. The town is famous for its water and groats, but they are nowhere to be seen! What could’ve happened to the village?

[Episode 3] The Boy Who Lied

The villagers have branded Mead as the boy who lied. It doesn’t seem like he lied about anything in particular though. What could’ve happened?

Mead placed a bug in a Holy Knight’s Ale out of anger, as the Knight cruelly mocked the villagers. Now the town is in crisis because of his actions. Could there be a way to resolve this?

The Holy Knight’s subordinates are threatening to raise taxes if the villagers don’t pull the Knight’s sword from the ground by sunset. Meliodas finally steps forth to help.

Peace returns to Vanya when Meliodas pulls out the Holy Knight’s sword. Grateful to Meliodas, the villagers decide to celebrate at the Boar Hat.

The Boar Hat is packed with Vanya’s celebrating villagers. Little do they know, something ominous hurtles through the air towards them.

[Episode 8] In Search of Allies

Meliodas has decided it’s time to move on from Vanya. He heads to the Forest of White Dreams in search of an ally he saw 10 years ago.