[The Four Archangels] Tarmiel of Ocean

Draw Hero
Blue Tarmiel decreases allies' final damage received and uses a Stance skill which makes him take some of the reduced damage for allies. 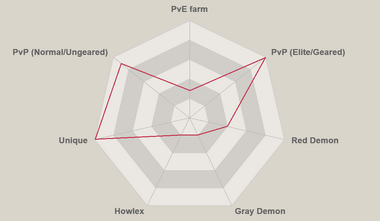 [The Four Archangels] Tarmiel of Ocean, also known as Blue Tarmiel, is a top-tier PVP hero known for his capability to tank and support his allies in battle. His stance skill provides protection by decreasing the enemies' final damage while absorbing some of the damage to him. His Unique ability decreases the enemy's max HP in proportion to his Defense, making "Iron Will" the ideal equipment set for him.

Most of his abilities revolve around Defense. His Grace allows him to self-regenerate, converting 150% of his Defense to HP when attacked during the enemies’ turn. He can effectively take advantage of this effect since he’s able to receive damage from his stance skill. Like all of the Archangel’s Grace, this effect can also be transferred to any hero when Blue Tarmiel is used as an Association hero.

Aside from his tanking capability, he also provides good utility by being able to deplete the enemies’ Ultimate Move Gauge orbs. His Ultimate Move will also hit hard because it scales on Defense and will heal his allies by 30% of the damage dealt.

Stats wise, his base Combat Class is one of the highest in-game, boasting ridiculously high HP and Defense stats. His secondary stats are also high, notably Pierce Rate, Crit Resistance, and Crit Defense, allowing him to effectively tank and inflict significant damage at the same time.

Ark Shield - A stance that lowers the final damage of the attacker and absorbs a portion of the damage whenever an ally is attacked. This skill goes hand-in-hand with his Grace, where he recovers HP every time he receives damage during the enemies’ turn.

Ultimate: Ark - Blue Tarmiel's Ultimate scales on his Defense stat, allowing him to also inflict significant damage. Additionally, 30% of the AOE damage will be converted to Heal allies. With this, he can solely focus on building up his Defense stat and opt-out the Attack stat.

Unique: Angelic Wrath - This further proves why building his Defense stat is the main priority -- this ability will greatly reduce the enemies’ max HP the higher Blue Tarmiel’s Defense is. At a decent range of 10k Defense, he can reduce 20k HP from his enemies, making it easier for you to burst down your enemies.

Grace: Grace of Ocean - All the Archangels have an exclusive passive ability called Grace, similar to how the Ten Commandments have their own Commandment. Grace of Ocean allows Blue Tarmiel to recover HP equal to 150% of Defense whenever he receives damage. This skill works hand-in-hand with his “Ark Shield” skill where he absorbs a portion of the damage whenever an ally is attacked, forcing his Grace to activate consistently. At a decent range of 10k Defense, he will heal 15k HP during his turn when he receives any amount of damage during the enemies’ turn.

First, it will greatly reduce the enemy’s max HP at the start of the battle, making it easier for your damage dealers to burst down any enemy. Second, Grace of Ocean will heal more as his Defense gets higher. Third, his Ultimate Move deals more damage with higher Defense, and it will heal more based on the amount of damage inflicted. Blue Tarmiel can also be used as an Association unit to provide endurance and longevity, especially on heroes with good defensive stats.

PVE (Story / Boss) - Blue Tarmiel can be used to clear the difficult stages and roadblocks of PVE battles and story mode bosses. He will have limited use in grinding free stages, however, since he’s built more for defense.

Tarmiel is one of the Four Archangels of the Goddess Clan. He is also one of the commanders of Stigma alongside Ludociel and Sariel. As one of the Four Archangels, Tarmiel is an extremely powerful goddess. He was confident that he could eliminate the Ten Commandments within ten seconds. Tarmiel's young and old looking heads can fire a holy beam from its eyes and loud blast attacks from its mouth respectively which makes any attempt of flanking the three-headed Archangel difficult.

At some point of his life, Tarmiel was given his Grace by the Supreme Deity. He was close to the four archangels and to the Deity's daughter. Though he apparently wasn't particularly close to Mael, Tarmiel asked Sariel to be less blunt at point out Mael's adoration to his older brother Ludociel, much to the younger goddess' embarrassment.