[The Four Archangels] Ludociel of Flash

[The Four Archangels] Ludociel of Flash or more commonly known as Blue Ludociel is capable of decreasing the enemies’ defense-related stats. His Unique ability is game-changing especially in PVP as the effect automatically activates if the condition is fulfilled. But for that to work consistently, the goal is to have the highest Combat Class which entails a lot of investment in your resource.

Blue Ludociel requires a higher Combat Class than his opponent for the Unique ability to take effect, thus he needs to have a full set of enhanced cosmetics, high-quality equipment, and maximum Ultimate level. Players use him so that their team gains a huge attack advantage at the start of the battle. This is especially true in top tier PVP matches.

Another notable passive skill is his Grace, which innately evades skills with Petrify, Freeze, or Stun effects for 2 turns at the start of the battle. This Grace effect can be transferred to any hero when Blue Ludociel is used as an Association hero.

Stats wise, he boasts an extremely high Attack and HP stats. His Pierce Rate is also very high, which compensates for his low Crit Chance.

Blue Shine Blade - A strong single-target skill but without any additional attack effects. With a high Pierce Rate stat, it is guaranteed to inflict substantial damage on the enemy regardless of their attribute and classification. This skill is best used when you’re aiming to burst an opponent in battle, especially if that hero is a key component of the enemy’s team.

Holy Beam - An AOE skill that inflicts Rupture, dealing 2x damage against buffed enemies. Since numerous PVP meta teams rely on buffs for their strategy to work (Blue Goddess Elizabeth teams, Red Arthur teams, Green Merlin teams), this skill can be your convenient go-to move whenever the enemy teams have active buffs on their heroes.

Ultimate: Goddess Holy Ark - AOE Attack which also grants protection for your allies based on the amount of damage inflicted. The percentage amount of damage converted to a barrier also increases with the hero’s Ultimate level.

Unique: Supplication of Blessings - His trademark ability, automatically decreasing the enemy’s Defense-related stats (Defense, Resistance, Crit Resistance, and Crit Defense) by 40% for 3 turns if Blue Ludociel has a higher Combat Class than the enemy hero. This provides an awesome opportunity to burst down your enemies even with rank 1 skills.

Grace: Grace of Flash - All the Archangels have an exclusive passive ability called Grace, similar to how the Ten Commandments have their own Commandment. Grace of Flash provides evasion for 2 turns, making the hero immune to Petrify, Freeze, and Stun. This passive is perfect for rushing an Ultimate and avoiding crowd-control. Note that the Grace effect can be transferred to any hero when Blue Ludociel is used as an Association hero.


PVP - A top choice for PVP especially in Geared (Elite) mode. Equipping Blue Ludociel with HP/Def set will maximize his Combat Class, increasing the chances of activating his Unique ability amongst all enemies. His usage is timeless and can be used against any PVP team. He can also be used as an Association unit for your Ult Rush teams, protecting your damage dealer from getting crowd-controlled by heroes that can Petrify/Freeze/Stun (Blue Goddess Elizabeth, Blue King, etc.)

PVE (Dungeon / Free Stage / Boss) - Although not his strong point, Blue Ludociel’s Unique ability will still work against enemies outside Death Matches. He provides an initial boost to clear most of the PVE content with ease. However, he has limited use in grinding free stages due to its slow clear time.

Training Grotto - He can be used as an alternative hero to counter Strength-type (Red) Illusion Ambers, especially against Level 3 stages. 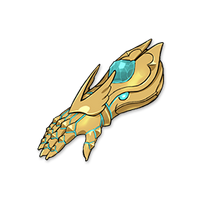 He is first seen welcoming the humans when they arrived at Stigma's base which is located in the Fairy King's Forest. He was aided by the Divine Lance Corporal Nerobasta, and she seems to have acted as his assistant in his schemes. There, he declares his intentions to end the Holy War by exterminating the entire Demon Clan. Elizabeth is reluctant towards his ideas, saying that he himself said that there should be peace among all the clans. Ludociel replies that the demons are nothing but disgusting beings who can not be compared to them, telling Elizabeth that she must sever her ties with Meliodas, who is the heir of the Demon King. When Elizabeth leaves, Ludociel tells Nerobasta not to go after her since he can not do anything to prevent the plan that has already started.