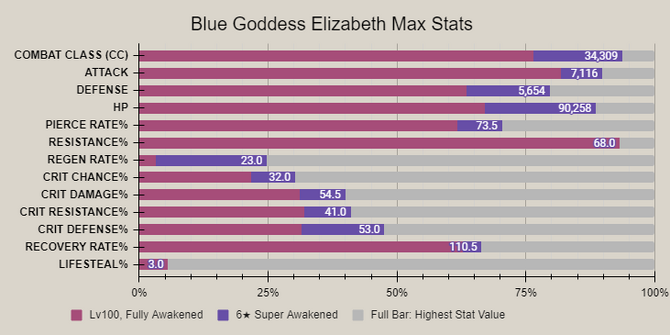 [Holy Warrior] Goddess Elizabeth or more commonly known as Blue Goddess Elizabeth is the second Festival Hero of 7DSGC. She was released during the Liones Festival Draw event (November 10 - December 8, 2020) and can only be acquired during Festival Draws. Like pick-up events, she is a guaranteed reward after completing the loyalty gauge for spending 900 Diamonds.

As expected from a Festival-exclusive unit, Blue Goddess Elizabeth is a top tier hero that provides exceptional utility for your team. She can heal, create a barrier, stun, cancel stances, and reflect damage, all of which are crucial skills to sustain from enemy attacks. Moreover, her Unique ability allows her to revive allies once per battle, which is very useful in PVP to protect your damage dealers from getting burst. So far, she’s the only hero in the game who can revive allies.

Her base HP is immense and further strengthened by high Resistance and Recovery Rate, making it hard for enemies to eliminate her all throughout the battle duration. She also has a respectable attack value which increases her barrier’s amount of damage absorption. The only limitation is her use in farming PVE stages, as she’s only focused on the defensive end. Despite it, she is still viable against story mode bosses and hard to clear areas of PVE, especially when you’re lucky enough to get her in the early phase of your progression.

Let There Be Light - A single-target skill that can cancel stances and stun the enemy starting at skill rank 2. Blue Goddess Elizabeth is best paired with a hero that can Increase Skill-Rank to help her utilize this skill effectively (notable heroes are Red Gowther, Green Halloween Gowther, and Green Shin).

Goddess Bless - Her barrier scales based on her Attack value which means the more attack she has, the more damage the barrier can also absorb. As long as the barrier is active, your team will only take damage from basic stats, meaning it nullifies the additional effect such as Amplify, Blaze, Charge, etc. excluding Rupture.

Ultimate: Goddess Pattern - Recovers HP of allies based on their max HP and provides a buff that reflects the damage taken, additionally healing half of the damage reflected. This skill provides even more protection once leveled up because it will increase the percentage of recovery and reflect, ensuring safety for all your team. The damage can also backfire to the enemy when they attempt to burst your team while the buff is active.

Unique: Embrace of the Goddess - This is Blue Goddess Elizabeth’s signature ability which allows her to instantly revive a character once per battle, negating death and maintaining the same amount of HP they had before dying. This is an awesome utility to protect heroes like your damage dealers.


PVP - This is where Blue Goddess Elizabeth reigns supreme. She counters most meta teams like Mono-Red (Amplify) and Pierce comps as she negates their ability effect, reducing the damage received. Her ability to revive an ally will also allow you to set-up good combos, protecting your damage dealers for the most part. Not to mention, she can provide additional utility from her stuns and cancels enemy stances.

Story Mode boss battles - Blue Goddess Elizabeth can still clear most of the PVE content with ease and is a safe bet when doing story mode battles. She will have limited use in grinding free stages, however, since she’s built more as a defensive unit.

Early Game PVE - She provides the needed survivability to clear hard stages and major roadblocks of the game.

Red Demon - Her stun can be a good source of crowd-control, forcing the demon to lose a turn. She can also be used to protect allies with her shield, making her effective in all difficulties including Hell mode.

Training Grotto - She is mainly used as a counter to Strength-type (Red) Illusion Ambers, especially against Level 3 stages. 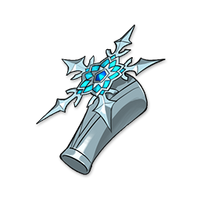 Elizabeth「エリザベス」 is one of the highest-ranked members of the Goddess Clan and the Supreme Deity's daughter. She also is the original incarnation of Elizabeth Liones, as well as Meliodas' lover 3,000 years ago. Due to her helping members of the Demon Clan in the Holy War and by falling in love with one of them, Elizabeth was punished by the Demon King  with a curse to reincarnate as a human and losing her memories, dying over and over again.