Coin Shop
Chapter 4 Story
Blue Giant Diane's skill has a Rupture effect which inflicts great damage on buffed enemies. It is effective against enemies who have buff skills. 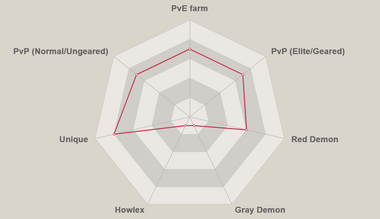 [The Serpent Sin of Envy] Holy Knight Diane or more commonly known as Blue Giant Diane is a hero you can get for free by clearing Chapter 4 of the Main Story. She plays a large role in getting you through roadblocks of the story mode and sub-quests, as well as climb ranks in PVP.

She provides good damage and utility through attack disable. As the battle progresses further leading to more turns, Blue Giant Diane’s unique ability will gradually increase her attack for up to 30%, making her extremely powerful in longer fights.

Ground Gladius - Doubles the damage when used against buffed heroes. At max rank, she can deal 500% of her attack on all enemies. This skill, however, does mediocre damage against an unbuffed hero. The timing and usage of this skill are crucial.

Ultimate: Mother Earth Catastrophe - With the help of her Sacred Treasure “War Hammer Gideon”, she inflicts up to 900% attack on all enemies using brute force. This does not have an additional skill effect like most Ultimates (ex. Rupture, Shatter) but the high damage multiplier is sufficient enough to crush her enemies.

Unique: Giant's Will - This unique ability gradually increases Blue Giant Diane’s attack by up to 30%, achieving the max value on the 5th turn. This perfectly sets up a combo with her Ultimate, adding more damage to an already powerful skill.


PVP - In the early phase of progression, Blue Giant Diane will be a huge help in increasing your PVP ranks from Bronze to Platinum. Moreover, she is a Strong counter to Mono-Red and buff-centered teams which are prevalent in Master Tier and above.

Early Game PVE - As part of the reward for clearing Chapter 4, Blue Giant Diane provides the much-needed support to clear hard stages and major roadblocks of PVE game modes. Until you can build a more efficient PVE team for farming (Red Howzer teams), Blue Giant Diane and Blue King remain to be an effective choice for budget-friendly teams.

Story Mode boss battles - There are storyline battles where you are required to use Diane. Blue Giant Diane does the job extremely well compared to other versions of Diane (Ex. Stage 1 of Ep.72 Hendrickson Boss).

Early Game Red Demon - After unlocking the Red Demon at Chapter 5 and having a limited pool of heroes to select, Blue Giant Diane is one of the most favorable choices for starters alongside Blue King and Green Gustav.

Training Grotto - Blue Giant Diane is popularly used versus the Level 3 Red Amber Frenzied Giant and Explosive Giant. She can also be utilized when fighting Strength-type (Red) Illusion Ambers. Check out Training Grotto Level 3 teams for a full list of recommended heroes on each boss battle.