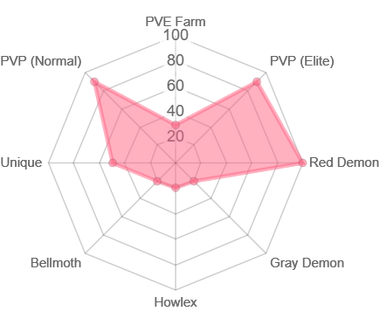 Cusack and Chandler were first introduced in the story during the prelude of the New Holy War arc, revealing them to be the former masters of the demon princes. Long before the first Holy War, Cusack trained Zeldris in combat as ordered by the Demon King.

He is very much attached to his student and believes Zeldris is worthy of reigning the Demon Clan instead of Meliodas. Cusack holds an unmatched skill in wielding swords and can use two identical sword hilts on both sides of his hips which he channels his darkness through to create two blades.

In the game, Festival Cusack is a utility and damage dealer. He inflicts Cleave damage and depletes Ultimate Move Gauge orbs to prevent enemies from using their Ultimate Move. Cusack gained the moniker "Napping Reaper" from his Ultimate Move called “Resonant” which allows him to link with someone through eyesight, eventually inflicting Power Strike damage to the enemy.

Cusack is widely used in PVP to counter enemy teams with HP-increase abilities, notably Red Purgatory Ban teams. He is also viable in Red Demon Death Matches due to his hero-type advantage. Stat-wise, Cusack has a high Attack, Pierce Rate, Crit Damage, and Lifesteal, giving him the potential to dish out heavy single-target damage.

Demonic Blade - A single-target attack similar to Green Festival Zeldris’ “Black Road” skill. It inflicts Cleave damage which cannot be a Critical Strike but instead gains additional damage equal to 75% of his Crit Damage. This skill complements well with Green Festival Zeldris’ Commandment, assuring Cusack to be safe from its debuffs.

Ultimate: Resonant - Festival Cusack’s ultimate is a single-target attack with a Power Strike effect, inflicting additional damage based on the target’s Resistance. It has a 56% multiplier increase per level starting at 560% and maxes out at 840%.

From levels 3~6, his Ultimate gains an Abyss effect that inflicts damage on all enemies at the start of the enemy's turn. The additional damage is equal to the percentage of damage dealt from his Power Strike attack.

Note: The Ultimate Move itself is a single-target attack, but the Abyss (damaging buff effect) is AOE.

Unique: Swordmaster - Festival Cusack’s Unique ability is effective against teams with Increase HP or Increase HP-related stats buffs. It inflicts additional damage equal to 40% of the enemy's increased Max HP in PVP whenever a Demon ally lands a non-critical hit on a single target.

His Unique ability, however, is very limited and only works against specific teams (Ex: Purgatory Ban team).


PVP - Festival Ludociel elevates his allies to their peak potential. His skills provide crucial utility through cleansing and defensive protection. Not only that, his buff provides an attack boost that increases damage dealt to enemies, making everyone a viable damage dealer including himself. A full Goddess team with buff and stance abilities may benefit most from his passive effects, but any team combination with Ludociel can still work tremendously well.

Equip him with HP and Defense equipment sets for high CC. Survivability is key for Ludociel to effectively execute his role.

Red Demon - Festival Ludociel’s buff can be used to amplify attacks and reduce damage taken from the demon.

Cusack is one of the highest-ranked demon of the Demon Clan as well as Zeldris' former master. He and Chandler were once a single entity known as the "Original Demon".

Like Chandler's attachment to Meliodas, Cusack is very much attached to his student, Zeldris, expressing the utmost confidence and loyalty to the Demon King's second son. This extends to the point that he believes Zeldris to be worthy of reigning the Demon Clan next instead of Meliodas. This attachment led him to express complete anguish and shame along with rage when he ranted about how he failed to protect Zeldris when Meliodas pinned him down upon his arrival to Camelot.