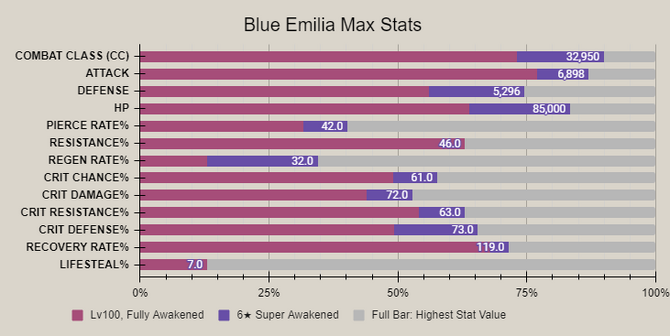 Emilia is the main heroine from Re:Zero and was introduced to 7DSGC Global during the collab event May 11th to May 25th, 2021 when the characters of Re:Zero (Subaru, Emilia, Rem, Ram and Beatrice are somehow transported to Brittania.  She is a silver-haired half-elf girl who is one of the candidates to become the next ruler in the royal election, which would make her the 42nd King of Lugunica.  She is originally from the Frozen Elior Forest and unfortunately for Emilia, her heritage and her appearance have a striking resemblance to Satella, the Witch of Envy, who is one of the most feared and hated people in Lugunica.  As such, she is frequently shunned and hated by others which leaves her lonely and without many friends.  Regardless, she asks that others judge her impartially, and to judge only her and not her family (the other elves).  She is quiet but brave and is seen as Lugunica’s hope for a better future due to her advocacy of social equality.  As a Spirit Art User, Emilia has formed a contract with a loveable spirit named Puck, the Great Spirit of Fire.  Puck typically maintains the form of a cat and can frequently be seen playfully bouncing on Emilia’s head while holding her hands and dancing.  Her character in 7DSGC is of the Speed Attribute and Unknown race, and she can freeze enemies to render them powerless, inflicting damage based on remaining HP.

Counting on You, Puck!: This ability demonstrates Emilia’s reliance on Puck, her familiar and contracted spirit who possesses the ability to release his magical energy and freeze the world around him.  With this skill, Emilia is able to freeze enemies, and with higher rank cards even inflict damage while freezing.  Additionally, the second and third rank cards will inflict damage equal to 20 - 40% of the remaining HP when removing the freeze state with a Skill, Unique, Commandment, or turns passing.  This skill is a single-target only skill.

Al Huma: This ability is named after the Re:Zero magic spell, Al Huma.  In the anime, Al Huma can be used by either Water Magic or Fire Magic users and allows the user to create a sharp ten meter long spear of ice which can also be modified to trap enemies.  In 7DSGC, Emilia’s card’s graphic shows several spears of ice flying out around her toward her opponent and inflicts damage against her enemy, and depletes Ultimate Move Gauge orbs from all enemies at the end of the enemy’s turn.  This is very effective to control opponents and prevent them from using their Ultimate Moves, particularly since it is an AoE skill.

Ultimate Move – Bond With the Great Spirit: Emilia possesses a special bond with Puck, who is the Great Spirit of Fire.  With this skill, Emilia is able to inflict Secret Technique damage against all enemies, which deals damage with attribute advantage regardless of attribute.  This is very useful when the enemies are from multiple attributes.  The damage dealt from this skill is the same as Lostvayne Meliodas’s Ultimate Move and increases greatly with the more cards she has on hand.

Unique - Spiritual Arts User: Emilia’s Unique ability makes reference to her status as a Spiritual Arts User.  With this ability, if Emilia is attacked by the same enemy two or more times during her enemy’s turn, all Debuffs on allies will be removed and the enemy will be frozen for two turns.  This is typically more useful in PvE than PvP since it can easily be avoided in PvP if an opponent is aware to not attack her twice using the same enemy if they are using single-target attacks.  This ability can be very annoying in PvP though for enemies who rely heavily on AoE attacks.

Emilia is highly versatile for PvE and PvP crowd control since she is able to freeze her enemies and prevent them from being able to use their Ultimate Moves.  Additionally, her Ultimate Move is very powerful and applies attribute advantage regardless of her enemies’ attributes.  Additionally, if a single enemy attacks her twice in the same turn he/she will be frozen.

A great team that works for Emilia is to use her with Festival Merlin and Goddess Elizabeth, with Ram in the sub slot.  This same team composition can be used replacing either Festival Merlin or Goddess Elizabeth with either Red or Green Gowther.  This team composition works well since the team will be fully Unknown race-based, and Ram provides an increase to all Unknown race allies’ basic states by 20%.

Emilia is the main heroine of the Re:Zero kara Hajimeru Isekai Seikatsu series. She is a Half Elf and a candidate to become the 42nd King of the Dragon Kingdom of Lugnica in the Royal Selection. Officially debuting at the very start of the series, she's arguably the most important character in the series as most events somehow revolve around her.