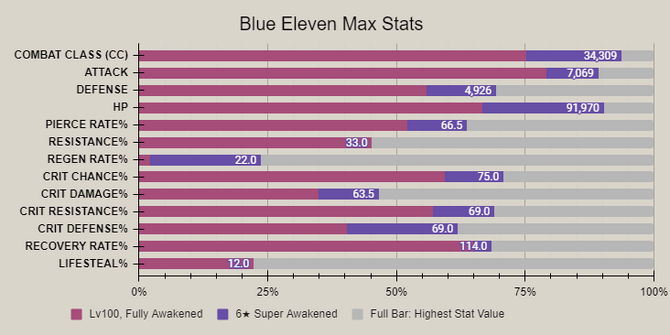 Eleven is a character from the TV series Stranger Things and debuted in 7DSGC during the collab event that occurred in global April 27th to May 11th, 2021.  In the TV show, Eleven’s real name is Jane “El” Hopper (previously Ives), and she is one of the main protagonists of Stranger Things.  She was born with preternatural abilities acquired through a combination of inheritance and exposure to hallucinogenic drugs while in utero during her mother’s time as an MKUltra test subject.  Having been abducted at birth and raised in Hawkins National Laboratory, she was experimented on for her inherited psychokinetic abilities.  She managed to escape the laboratory and was found by some of her friends (one of which was Mike Wheeler), and asked to use her abilities to help find their missing friend Will Byers.  During this time, she developed a romantic relationship with Mike and later finds out that during her time at the Hawkins National Laboratory she had somehow made contact with a creature from another dimension (the Upside Down).  In this other dimension, Will had somehow become trapped and needed rescuing.  In an attempt to protect her friends, she faced and destroyed the creature but then mysteriously disappeared afterward.  After she disappeared, she was found by Jim Hopper (Chief of Police of Hawkins, Indiana), who hid her in his grandfather’s cabin and took care of her for almost a year.  During this time, they developed a father-daughter bond and he later adopted her.  Together they closed the Mind Flayer’s Gate although the fight to defeat the Mind Flayer resulted in her losing her powers.

In 7SDGC, she possesses a Speed attribute and is from the Human race.

Psychokinesis: This skill is a single-target attack skill that deals Power Strike damage.  This attack is similar to Red Sariel’s, with Power Strike doing additional damage that is equal to the enemy’s Resistance.

Psychic Wave: Eleven’s AOE attack, Psychic Wave, also inflicts Wave damage.  Wave damage is a new type of modifier that reduces the damage dealt based on the number of enemies that are on the battlefield.  Thus, even though this is an AOE attack, it can also be very effective against a single-target as it will have reduced damage reduction against less targets.

Unique - Cost of the Power: Eleven’s Unique ability makes reference to the physical effects that using her power has in Stranger Things -- using her powers takes a toll on her body, and frequently results in nosebleeds (hence her unit appearance having blood dripping from her left nostril).  Her Unique ability increases the damage that she deals against all enemies by 40%, however, her Remaining HP decreases by 10% for each Skill use.  This lost HP can either be restored by using her Ultimate Move or by accompanying her with a Healer.

As a unit, Eleven is great for both geared and ungeared PvP.  Her Unique ability increases damage that is dealt against enemies by 40%, and unlike other units with similar Unique abilities, hers is not restricted to a specific race or attribute.  However, using Skills depletes her own HP by 10% for each Skill uses, which can either be restored through her Ultimate Move or by accompanying her with a Healer.  Her skills can be used either as single-target or AOE, with increased damage being dealt when being used as a single-target damage dealer.

She can also be a very viable unit to use against the Red Demon, or in the new Tower of Trials as a heavy damage dealer, particularly on the first and second floors.  The best equipment to use on her is Attack gear to take advantage of her DPS, however another good mix can also be to use a combination of Defense, Crit Damage, and Lifesteal equipment.

Jane "El" Hopper (born Jane Ives), better known as Eleven, is one of the main protagonists of Stranger Things.

Eleven was kidnapped and raised in Hawkins National Laboratory, where she was experimented on for her inherited psychokinetic abilities. After escaping the lab, she was found by Mike, Lucas, and Dustin. Upon discovering her abilities, Mike believed that she could help find Will, their missing friend. During their time together, she and Mike formed a strong bond and quickly grew to like each other. It was ultimately revealed that, in a lab experiment, she made contact with a creature from another dimension, accidentally opening an inter-dimensional gateway. In an attempt to protect her friends, Eleven eventually faced and destroyed this monster in a showdown at Hawkins Middle School, mysteriously vanishing in the process.