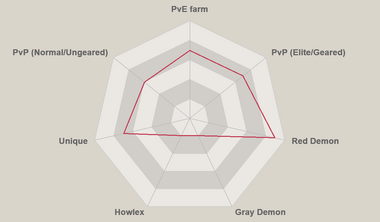 Blue Eastin has niche usage in PvE content such as the Tower of Trials and the Hell difficulty of the Red Demon Death Match. In these types of PvE battles, Blue Eastin is a great buffer to use to increase the Attack-related stats of her allies. She is often seen paired with Blue New King Arthur and Blue Zeldris.