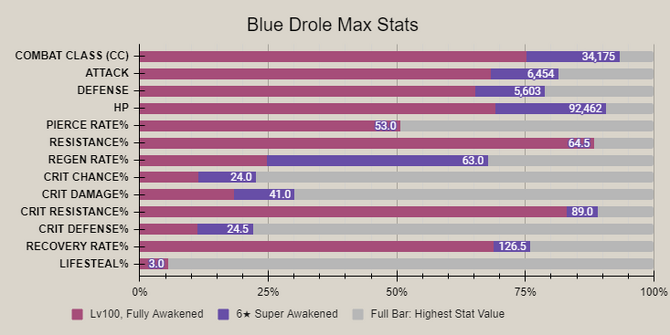 [Elite Demon] Drole of Patience or more commonly known as Blue Drole is known as a dependable tank and utility for specific PVP teams, notably with Red Sariel.

He has a reliable AoE taunt skill that protects himself by increasing his HP-related stats and rendering him immune to Petrify. This allows you to protect your damage dealers from a potential enemy burst. Moreover, his Ultimate skill ignores the enemy defense and inflicts a gigantic AoE attack. Blue Drole is also capable of petrifying an enemy for additional crowd-control, similar to how Blue King and Red Helbram operate with their Petrify skill.

His Unique ability is a good combo with his Taunt, boosting the attack of his team by 3% for each buff applied to him. When activating his taunt skill, he gains 3 individual buffs (Taunt buff, Increase HP-related stats buff, and Immune to Petrify buff) resulting in an additional 9% attack.

His Commandment boosts a hero’s Resistance upon taking damage from a skill in PVP (also applies to enemy heroes). You can take advantage of this situation by using heroes with Shatter, Power Strike, and Amplify effects.

Heavy Assault - A single-target skill that can Petrify an enemy. There are moments in the battle where this skill saves you from sticky situations. One of those is delaying the enemy from casting his ultimate. Another is disabling the enemy’s support, especially heroes who can heal or remove debuffs. It is also important to remember that the petrified hero cannot receive buffs.

Heavy Metal - A very convenient skill that works well with his Unique ability, additionally boosting his allies’ attack by a total of 9%. When the Taunt is activated, he further increases his HP-related stats (Recovery Rate, Regeneration Rate, and Lifesteal) and becomes immune to Petrify, which leaves Cancel / Remove Stance the only way to get rid of the Taunt.

Unique: Blessing of the Earth - Often overlooked but actually a crucial skill that significantly boosts the Attack stats of his allies, especially when used in combination with his Taunt skill “Heavy Metal”. For every buff applied on Blue Drole, it will give a 3% attack boost to his allies. His Taunt skill already gives a 9% attack boost and it can be stacked further when another buffer is present on your team.

Commandment: Commandment of Patience - All members of “The Ten Commandments” have an exclusive passive ability where all heroes on the battlefield (including the enemy) need to abide by that rule. “Commandment of Patience” boosts a hero’s Resistance upon taking damage from a skill in PVP. With Blue Drole taunting his enemies to direct all of the attacks against him, he further improves his tanking capability for each attack received from the enemy. Since the commandment adds a buff effect, it will also create a chain reaction from his Unique ability that gives an attack boost to your allies.


PVP - Blue Drole’s primary benefit is in PvP, mostly in Geared (Elite) mode. He requires a specific team composition that can easily blend in with his Commandment and Unique ability. One of the best examples is Red Sariel, who inflicts a Power Strike attack that scales damage based on the enemy’s Resistance. Another is by utilizing heroes with Shatter effect that ignores the enemy’s Resistance, or heroes with Amplify effect that scales damage based on the hero’s number of buffs. Most would prefer an HP/Def gear to maximize his purpose of tanking and holding aggro attacks.

Red Demon - The general strategy (except for Hell difficulty) is to always make sure the turn ends with a Petrify or Freeze skill. You can use Blue Drole’s “Heavy Assault” to keep the boss disabled every turn.

PVE (Story / Boss) - Blue Drole can be used to clear the difficult stages and roadblocks of PVE battles and story mode bosses. He will have limited use in grinding free stages, however, since he’s built more for defense.

Training Grotto - Blue Drole’s Petrify debuff has a niche use in fighting against the Level 3 [Red Amber] Explosive Giant who is immune to Freeze and Ultimate Move Gauge reduction. The 2 ways to immobilize this boss is only via Stun and Petrify. 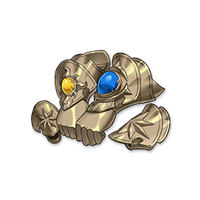 Drole, also known to humans as Balor, is recognized as the founder of the Giant Clan, their former King and a god by some, according to the clan's legends. He later defected to be an elite warrior of the Demon Clan, serving directly under the Demon King as the Patience of the Ten Commandments, but ultimately left and returned to affiliate with his previous clan.