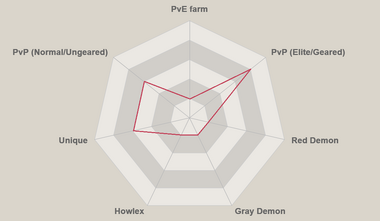 Blue Derieri was released for Valentine’s Day.  Her appearance has a frilly red and black dress with a sweetheart neckline, and she carries a heart-shaped box of chocolates above her demonic hand.  Additionally, she was released with a special Costume set effect that provides a bonus when fully equipped.  Her Sweet Chocolate Heart costume set is composed of the Allure of the Crimson Queen Outfit, Crimson Queen's Gloves Weapon, and The Crown of the Queen Cosmetic.  The overall set bonus grants one random Costume Enhance Materials Box when clearing Death Matches (limit six times per day; randomized activation if duplicate Valentines Set Bonus exists).

Heavy Impact: Blue Derieri’s primary attack skill removes buffs from her enemy while she is attacking.  Rank 3 of this skill also cancels stances in addition to buffs, which is useful for countering enemies such as Blue Goddess Elizabeth in PvP.

Valentine’s Gift: Aptly named for her Valentine’s Day theme, this skill taunts enemies and increases her Defense-related stats.  It also makes her immune to Stun.  By taunting her enemies, this skill helps to protect her allies in combat, and increasing her Defense-related stats increases her survivability (since she’ll be the primary attack target as a result of taunting).

Ultimate - Combo Star: Blue Derieri’s Ultimate Move inflicts Amplify damage upon a single enemy.  Amplify helps to deal an additional 30% of damage per active buff that is on herself, so this is particularly useful when stacked after her Valentine’s Gift skill or when used in combination with another hero who is able to grant her buffs.

Unique - Cynical Beauty: Blue Derieri’s Unique ability increases her basic stats by 10% up to three times when she takes damage from skills.  Her Unique ability also applies an Ultimate Move disable effect on all enemies for two turns at maximum stack.  This can be extremely useful in PvP as it prevents her enemies from being able to Ult Rush.

Blue Derieri has good utility in a Festival Merlin PvP team.  This pairs her up with Green Festival Merlin, Red Gowther, and Green Deathpierce.  In this team composition, Green Festival Merlin serves as the primary damage dealer.  Blue Derieri is used to taunt enemies, cancel buffs and stances, and disable the enemy’s Ultimate Moves.  She also serves as a secondary damage dealer in this team.  Red Gowther is used to rank up skills, disable attacks, increase damage, and deplete the enemy’s Ultimate Move Gauge.  Green Deathpierce as sub increases the team’s overall damage output by decreasing the enemy’s Crit Resistance and Crit Defense.

Two other good uses of Blue Derieri are on either a “The One” PvP team, by pairing her with Blue “The One” Escanor, or a Sariel PvP team with Red Sariel.  Both of these team compositions will also make use of either Red or Green Gowther, and then lastly a sub of Green Deathpierce.  For both team compositions, either Escanor or Sariel serves as the primary damage dealer.  Blue Derieri, Red/Green Gowther, and Green Deathpierce serve similar roles on the team as in the Festival Merlin PvP team.