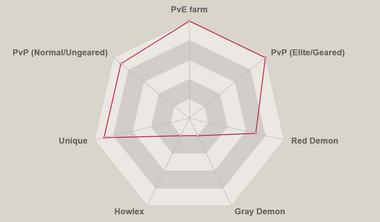 [Knight of Wrath] Demon Meliodas or commonly known as Blue Demon Meliodas is a versatile attacker in both PVP and PVE content. He is known for his AOE Pierce attack (similar to Red Howzer’s) and his corrosion skill which makes him effective against enemies with high HP.

In PVP, Blue Demon Meliodas is a favorite pick for players running a Pierce team composition. The team is best supported by Pierce enhancing heroes like Blue Lillia who increases the effectiveness of his “Enchanted Hellblaze” skill. The main team is then completed with a high pierce rate attacker like Green Escanor to easily burst down the enemy in one turn.

Efficiency is important in PVE and Blue Demon Meliodas is an ideal choice especially when grinding Free Stages, Dungeons, and Boss battles. As always, Blue Lillia or Blue Weinheidt is needed to boost his pierce rate to grant quick turns. Overall he is one of the units you can use extensively in all types of battle. Unfortunately, he isn’t purchasable in the Coin Shop and can only be summoned in SSR Part 2 tickets or special banners.

Ultimate: “Hell Buster” - this skill comes with a Weak Point effect, inflicting 3x damage against a debuffed target. In case the target has no debuff, you can use “Dark Flutter” first or an ally’s debuff skill to trigger the bonus damage.

Unique: “Absolute Volition” - Attack disables do not affect Blue Demon Meliodas as long as his Ultimate Move Gause isn’t full. This ensures the usage of “Enchanted Hellblaze” anytime when the skill is available. This counters the debuff effects of Red Gowther who is frequently used in PVP.


Free Stage - Used extensively in Free Stages to farm equipment. Together with Blue Lillia and Red Howzer, they can clear the waves faster because of their AOE Pierce attacks. Farming for equipment should always be set in stages with the highest difficulty (Hard difficulty drops SSR equipment). You can fill the sub-slot with a hero that gives benefit to your main team using their unique abilities. Some top examples are:

SP Dungeon (Fort Solgres) - Similar to Free Stages, he is also an effective farmer in this area (Events Dungeon, Enhance and Evolution Attribute Dungeons, and Gold Dungeon). Team composition is the same as Free Stage.

Boss Battle - He is a top choice in all chapters of boss stages to acquire Awakening materials and triggering a Death Match. However, he isn’t used in any of the Death Matches (Red Demon, Gray Demon, Howlex).

Training Grotto - He is mainly used to counter Strength-type (Red) Illusion Ambers, especially against Level 3 stages. A formidable mono-blue team can be formed alongside Blue Guila and Blue Jericho.