Draw Hero
Blue Chandler uses a Stance skill which returns damage based on the hero's Attack, plus a portion of damage taken, to the enemy. 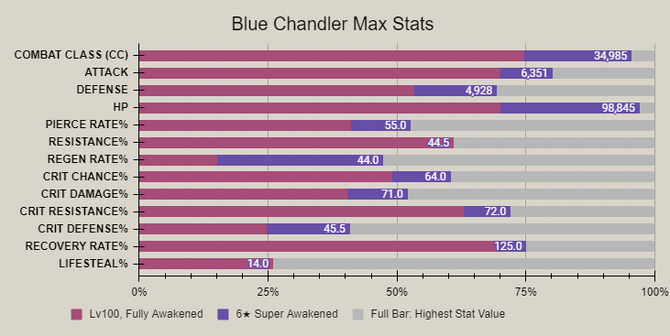 [Pacifier Fiend] Mage Chandler, more commonly known as Blue Chandler, is one of the best heroes in PVP and Story Mode battles. Similar to Meliodas and Estarossa, he can enact Full Counter, which reflects back the force of any physical attack. He also provides utility to help you clear the hard stages and major roadblocks of the game.

Blue Chandler is primarily used as a Support for Demon teams, particularly with Green “Assault Mode” Meliodas and Green Festival Zeldris. He can also be the main piece in a “stance” bruiser team with Blue Tarmiel and Green Estarossa. Building around him is quite easy because he’s an all-around hero who can deal and tank damage, or even annoy enemies by blocking their skill effects. His Unique ability is also one of the best defensive passives that automatically decreases the enemies’ stats when a skill is used against your team.

His signature skill, “Full Counter”, taunts enemies and inflicts counter damage based on his Attack and the amount of damage received. At rank 3, he’s able to return 100% of the damage back to the attacker. This will give your enemies the second thought of attacking, especially with their damage dealers who are typical “glass cannons”.

Having one of the highest base HP, gearing Blue Chandler with Life set will further reinforce his “Full Counter” skill. His Ultimate Move also inflicts an AoE attack that ignores the enemy Defense.

Stat-wise, Blue Chandler has high HP and Attack, and average Defense. Overall, he has a high Combat Class rating and can contribute a good amount of CC to your team.

Dragon Claw - A single-target attack used defensively to block the target’s skill effects including Ultimate Moves. It negates the secondary skill effects such as Pierce, Shatter, Charge, etc. It also disables inability effects such as Freeze and Stun. Moreover, it can be used to block buff effects of the target, for example, Gowther’s rank-up and Goddess Elizabeth's Heal and Shield. This skill is very useful against enemies who rely on skill effects, reducing their impact in battles.

Full Counter - Assumes a Counter stance that Taunts all enemies and counterattacks when attacked by a skill. Comparing the versions of “Full Counter” between Chandler, Meliodas, and Estarossa, his “Full Counter” is more impactful when he receives more damage from the enemy, reflecting a percentage of damage back to the attacker. This is a lethal defensive skill to counter the enemy’s damage dealer.

Ultimate: Meteorworks - An AoE attack with Charge effect that ignores enemy Defense, inflicting significant damage to all opponents. Backed up with his high base attack, Blue Chandler is a versatile hero that can turn up offensively when needed.

Unique: Darkness - Each time an enemy uses an attack skill in PVP, Blue Chandler penalizes the attacker by reducing its stats by 7% for 1 turn. The effect can be stacked when multiple attacks are used by the same enemy hero. This Unique ability can be viewed as an opportunity to gain an offensive and defensive advantage, reducing all damage taken while increasing your attacks towards the debuffed enemy.


PVP - Blue Chandler shines in all categories of PVP as a Support in Demon teams and Bruiser teams. He can block skill effects which is often used as a counter to buff/debuff users like Gowther and Goddess Elizabeth. His Taunt skill also protects his allies by directing all attacks to himself, additionally returning the damage via counterattack.

To best optimize the use of Blue Chandler in any team, equip him with HP and Defense equipment sets. This will ensure surviving burst attacks to effectively utilize the “Full Counter” skill.

Story Mode boss battles - Blue Chandler can clear most of the PVE content with ease and is a safe bet when doing story mode battles. He can potentially solo every battle with the use of his “Full Counter” and regain all the lost HP via lifesteal.

Red Demon - A decently geared Blue Chandler can lead a team to solo the Hell level of Red Demon. He eases the burden of starters who are having trouble clearing higher difficulties. However, seasoned players tend to not use him anymore as there are a lot of team compositions with faster clear time.

Training Grotto - He can be used to counter Strength-type (Red) Illusion Ambers. He is also effective against [Red Amber] Bishop of Love and [Red Amber] Frenzied Giant.

Chandler is one of the highest-ranked demons of the Demon Clan as well as Meliodas' former master. He and Cusack were once a single entity known as the "Original Demon".

He is very attached to his former student, Meliodas, so much so that unlike the other members of the Demon Clan, in particular Zeldris, he completely disregards the betrayal Meliodas committed towards the Demon Clan 3,000 years ago. He even goes as far as to say that the original Elizabeth had kidnapped Meliodas even when it's known that his former student betrayed his clan out of love for her.