Blue "The One" Escanor

[Invincible Avatar] "The One" Escanor

Festival Draw
Blue "The One" Escanor has a skill which inflicts greater damage the more HP he has left.

[Invincible Avatar] "The One" Escanor or more commonly known as Blue “The One” Escanor is the fourth Festival Hero of 7DSGC. He was released during The One Festival Draw event (February 16 - March 16, 2021) and can only be acquired during Festival Draws. Like pick-up events, he is a guaranteed reward after completing the loyalty gauge for spending 900 Diamonds.

As expected from a Festival-exclusive unit, “The One” Escanor is a top tier damage-dealer used extensively in PVP. He’s also an exceptional PVE hero, particularly in Story Mode battles and Red Demon Death Matches. His skill kit revolves around dealing an insane amount of single-target damage with the help of his Unique ability. His skills also have high damage multipliers. Along with these, we are introduced to 2 new skill effects: Flood and Death.

His unique ability provides a buff that increases all of his stats each turn. When 3 buffs are accumulated, he is automatically cleansed from all debuffs and becomes immune to any debuffs for 1 turn. “The One” Escanor becomes in his strongest state during this phase.

Stats-wise, he has extremely high attack-related stats (Attack, Pierce Rate, Crit Chance, Crit damage). He also has a high Defense, HP, Crit Resist, and Crit Defense. He has a low base Regeneration Rate and Recovery but is compensated by his Unique ability buff.

Super Slash - A single-target skill with Flood effect, dealing 0.8% additional damage for every percent of remaining HP on himself. “The One” Escanor can inflict the maximum bonus damage (80%) when attacking at max HP. Boosted by his Unique ability buffs, he’s able to one-shot most units at rank 3 with a 500% attack multiplier.

Supernova - A single-target skill with a high attack multiplier. Although “Super Slash” has more potential damage, “Supernova” is more reliable when “The One” Escanor has low HP as it inflicts fixed damage for up to 600% of his attack.

Ultimate: Divine Sword Escanor - Inflicts high single-target damage starting at 720% and up to 1080% of his attack. Additional Death damage will be inflicted consecutively based on the attack’s final damage. If the target dies on the initial damage, the Death damage will be inflicted on a random enemy hero on the battlefield. Thus, it can potentially kill up to 2 enemy heroes in 1 attack. Upgrading his ultimate will also increase the Death effect by up to 100%.

Unique: The One - Escanor will be at his peak power when he gains 3 stacks of this buff, gaining the advantage on both Offense and Defense. He will gain debuff immunity and increase all stats by 18%. It is usually best to reserve your attack cards until he gains at least 2 buff stacks. This increases the chances of killing your enemies in one strike when his Attack-related stats are boosted (Attack, Pierce, Crit Rate, Crit Damage). Moreover, he’ll be harder to defeat when he has more buff stacks.


PVP - This is where “The One” Escanor reigns supreme. He shifts the meta and easily fits with other top-tier support heroes like Green Halloween Gowther and Blue Goddess Elizabeth to create an even stronger team. He can effortlessly one-shot enemies when he has 3 buff stacks from his Unique ability. Although he is already strong in Ungeared (Normal) PVP, you will appreciate him even more in Geared (Elite) PVP where his stats can be increased further to his advantage.

Story Mode boss battles - “The One” Escanor can clear most of the PVE content with ease and is a safe bet when doing story mode battles. He can potentially solo every battle due to his high base stats and can regain all the lost HP via lifesteal.

Early Game PVE - He provides all the needed survivability to clear hard stages and major roadblocks of the game.

Red Demon - “The One” Escanor is great for Red Demon -- he can even lead a team to solo the Hell level on this boss. This can be done easily by using all of his attack cards when he has 3 buffs from his Unique ability.

Training Grotto - He is mainly used as a counter to Strength-type (Red) Illusion Ambers, especially against Level 3 stages. He is also effective against [Red Amber] Bishop of Love and [Red Amber] Frenzied Giant. 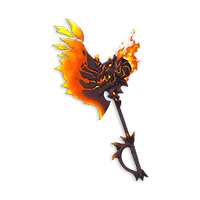