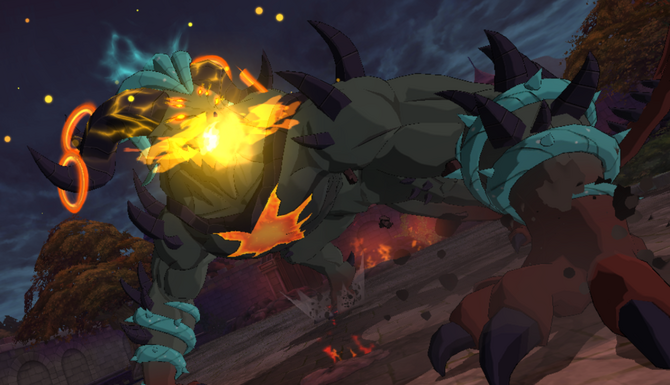 It is highly recommended to use heroes with Stance Cancel and Charge attacks.

Each demon has its unique trait and applies a certain strategy to defeat it. The most effective strategy is to build around Green Jericho since she is capable of inflicting melee burst damage on both of her attack skills. She is the most reliable attacker against Bellmoth, followed by Green Zaratras.

There are 2 widely used strategies for this Death Match - Burst and Counter.

For burst teams, each team should have a Green Jericho or Green Zaratras on their lineup as their main damage dealer. One team should have a Green Helbram to cancel the boss’ stance and increase attack-related stats, while the other team can use Green Liz (only works for a mono-green team) or sub damage dealer. Both teams should also have Green Halloween Gowther or Red Gowther for easy skill rank-ups.

In phase 2, use your damage dealer’s rank 3 skills which should be enough to defeat Bellmoth in a single turn. One of the teams should have their damage dealer’s Ultimate Move ready before entering phase 3. Finish off phase 3 using Ultimate Moves and melee attack skills. It is important to clear phases 2 and 3 in 1 turn because Bellmoth greatly increases its attack-related stats when it survives with low HP, easily wiping out your team when it has the opportunity to attack.

For counter teams, the main strategy greatly involves a damage dealer (Green Jericho or Green Zaratras) and Green Estarossa’s counter skill to deal damage. Having a hero who can initiate the turn with Cleanse/Remove Debuffs is crucial so you can immediately cast Gowther’s rank-up skill on Green Estarossa. End the first turn by having Green Estarossa’s rank 2 or 3 counter stance activated. The counterattack damage is usually enough to defeat phase 1. Else, you can finish phase 1 by dealing more damage on turn 2.

Entering phase 2, use your damage dealer’s attack skills to burst down the boss in 1 turn. Make sure that you fill up your damage dealer’s Ult Gauge in the process so you can use an Ultimate Move next turn. Finally, finish off phase 3 using Ultimate Moves and melee attack skills. It is important to clear phases 2 and 3 in 1 turn because Bellmoth greatly increases its attack-related stats when it survives with low HP, easily wiping out your team when it has the opportunity to attack. But however Green Estarossa's Blackout could save you as it skips opponent's turn saving you team from being wiped out and give you a extra turn needed to finish off Bellmoth but use it as a last skill used incase you defeat it in wave one or two so it doesn't go to waste.