The battle proceeds through selecting cards that represent the heroes’ skills. There are various skill combinations because 3 heroes participate in a battle and each hero has 2 skills and 1 ultimate skill.

Skills can be used as they are, but you can also move them where you want to. Also, there is a card rank up system that merges cards if the same skill cards are placed beside each other. This feature allows you to lead the battle in an advantageous direction even when skill cards are arranged randomly.

In all battles except the Knighthood boss, you initially draw 7 cards: 2 cards for each hero and 1 random card. 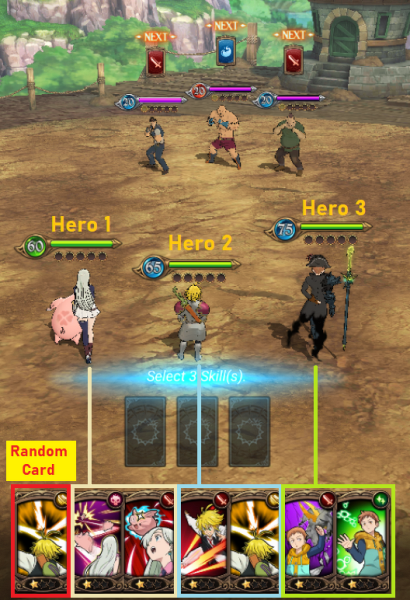 Tip: Since the last card is randomly selected during the initial drawing phase, keep in mind that the hero placed on the left side will have the possibility to merge their skill1 card. If you land on the right card, it naturally merges and sets you off to a great start. This is why hero placement is important. As a general rule, place the most important hero on the left side based on whoever makes a huge difference when their card is merged.

How to fill the Ultimate Gauge

To fill the ult gauge, you can either use skills, move it, or rank it up. You can fill one ult gauge for each move, or fill two or more if you manage to merge cards. If you fill the ultimate gauge to 5 orbs, the ultimate card will appear on your next turn.

Tip: The image above shows a rank-up is carried out at the same time as the skill is moved, charging the ult gauge twice in one action.

To cite a few more examples, let’s assume that one hero’s skills are A and B. If cards are arranged as A-B-A, use B skill, so that skill A ranks up automatically. That way you can charge two ult gauges with one action. 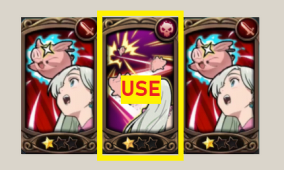 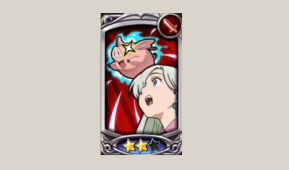 When arranged in A-B-A order, A automatically ranks up when B is used and charges an ult gauge twice.

How about the A-B-A-B situation? In this situation, move the skill rather than use it, the A and B skills both rank up. You could fill three ult gauges with one act.

Changing the positions of the two skills in the middle ranks up both skills and charges an ult gauge three times.

You can make three actions each turn. So you should decide whether you want to use a skill to deal more damage or move the skill to charge the ult gauge faster.

On the other hand, if you need to quickly charge the ult gauge, it is better to move the skill and use a higher rank. You will charge it three times in two moves: 'move skill - rank up - use skill'.

The sequence above managed to charge a total of four gauges through moving skills twice.

In addition, the higher the enemy's combat class, the higher the difficulty of the boss battle. So, the best course of action will be to use the ultimate skill fast. If your ult gauge is empty when the battle starts, we recommend actively moving skill cards to charge it quickly.

Charge the ult skill just before the boss shows up

Using the ultimate skill in boss battles is very effective. So your strategy can be to charge all the ultimate skills before the start of the boss battle. However, as the ult skill is also a card like other skills, if you charge it too quickly, it can occupy space and interfere with other cards.

Of course, you need to move the ult skill to the far right, but even that consumes one of the three moves from your turn. Therefore, it is good to reach an ult move as close as possible to the boss's appearance so that it doesn’t waste space.

In the image above, keeping Lizhawk’s ult card at the left blocked the chances of a natural merge for King’s skill 1 card.

Rank up to the right! 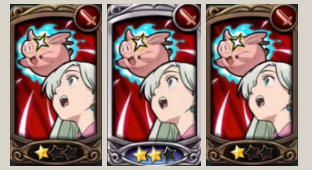 On the other hand, if the cards were originally placed as follows: 'rank 1 - rank 1 - rank 2', the rank 3 skill will be created naturally without consuming any action, and 2 special gauges will also be charged. If you need to increase the rank of the skill, it is recommended to move all higher rank cards as far right as possible.

Using one skill caught in the middle of the other ones will create a rank 3 skill and fill the ult gauge a total of 3 times in 1 move.