The Brawl feature can be found on the lower right half of the Battle menu. 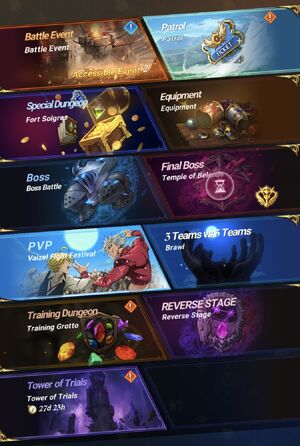 Upon entering the Brawl arena, there are three team slots at the bottom of the screen. 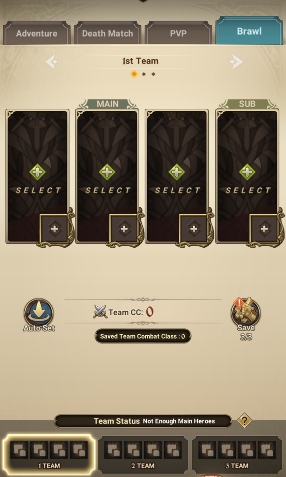 Each of the three teams must have at least one hero to participate.  Similar to the Vaizel Fight Festival, the player character becomes the Representative Character once you enter.  Teams are composed of three main heroes and one sub slot hero, each with an associated hero slot.  Hero equipment stats are taken into consideration for the Brawl combat.

Until there are sufficient heroes filling all team slots, the Team Status will continue to state “Not Enough Main Heroes”.

Icons for each of the positions will indicate the following:

Once there are sufficient heroes in all slots available, the Team Status will change to “Hero setting complete.”

Team settings can be changed a maximum of three times per day.  After the first time of saving teams, Diamonds are required in order to save them again.  These saves will reset at the same time as the daily quest reset occurs.  If a hero’s equipment or stat information changes, they will need to be saved to the Brawl team again in order for the new values to be applied, so make sure you carefully review who you are entering into Brawl before setting yourself as ready.

Once your teams have been saved and you are ready to enter the Brawl, click “Participate” on the sign-up form. 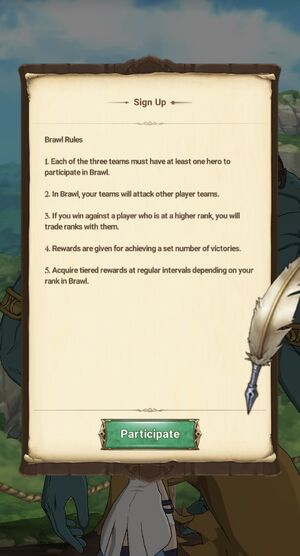 Brawl Entry Tickets must be spent in order to enter a Brawl match. 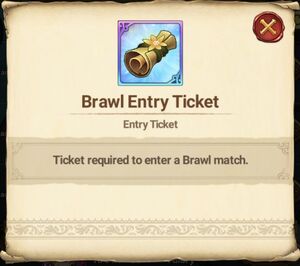 Each week there is an Exclusive Rule, which can be looked up by clicking the fist icon in the upper right corner.  For example, this screenshot shows an Exclusive Rule of Impending Death, meaning that the remaining HP will decrease by 10% every turn, starting after five turns.  After that, the effect increases by 10% at the end of every turn.  Pay attention to the Exclusive Rules each week of the season to make sure you’ve properly selected heroes that will help your survivability. 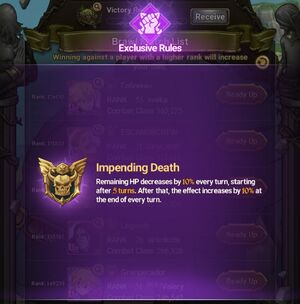 For Brawl combat, you will compete to climb the ranks by using three teams to attack or defend against other players.  You will be able to change the order of your teams before attacking, during three matches that will take place.  The player who achieves two wins first will be named the victor.

If you win twice against another player who is at a higher rank, then you will trade ranks with them.  Additionally, if your own teams lose twice against someone of a lower rank, then your rank will also be traded with theirs.  This rank trade does not happen until the end of the battle, so if the rank of the player that you attached changes before the match ends, that final rank is the one that will be traded.

To save time in combat, you have the option of skipping the combat animations and viewing the match results immediately.  You can do this by turning ON the “Skip Battle” button in the bottom right corner.  The final screen will show you either a victory or a loss.

Rewards will be granted after achieving a set number of victories, and tiered rewards can be acquired at regular intervals depending on the rank in Brawl.  Brawl Coins can be used to purchase items from the Brawl Shop.

The victory reward may only be claimed once per day and resets daily.  The Brawl Victory Box contains many great reward options, as shown in the photograph below. 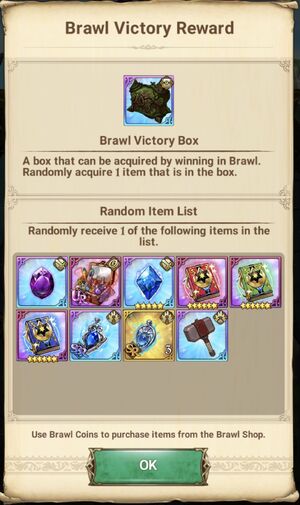 Last but not least, Brawl Record, at the very bottom of the screen, will show the five most recent Brawl matches.  Any matches that end abnormally and result in losses will not be included.

The Brawl Store can be shopped by visiting Gloxinia (immediately to the left of Drole). 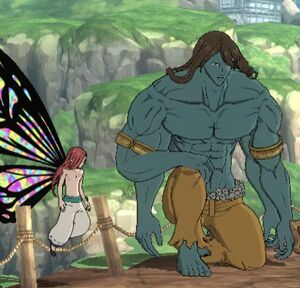 Higher tier shops become available along with rewards depending on the number of items that are purchased.

A rewards gauge at the top of the shop will provide free Diamonds at 20 purchases (Warrior), 40 purchases (Victor), and 80 purchases (which will reset the meter).